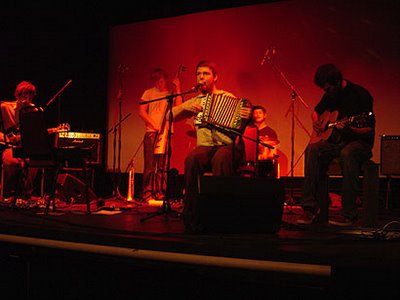 The first band ‘Jonquil’ was miss-billed as having a Brothers Quay aesthetic, but their music was not eccentric enough and was defiantly too upbeat folk/indie (for the most part), and too happy go lucky to qualify - liked ‘Shady song’ though as it possessed a pleasing Soft Machine sound. 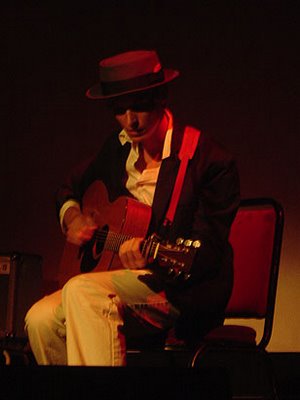 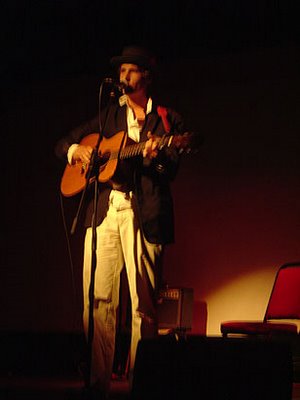 Tom Brosseau was all 1920s / 30s depression songs full of suicide, loneliness and lucklessness through gritted teeth and wild eyes. His guitar work was superb and his delivery tinged in bitterness, this man felt for all those forgotten anonymous penned failings. The crooked tale of a farmer taking his own life in an attempt to reincarnate the warmth of a woman by bleeding into the soil was truly bizarre. 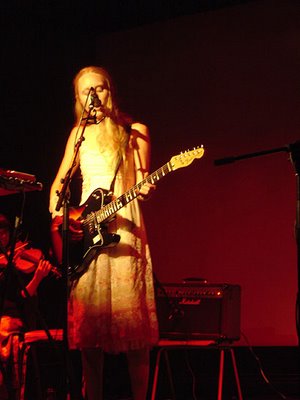 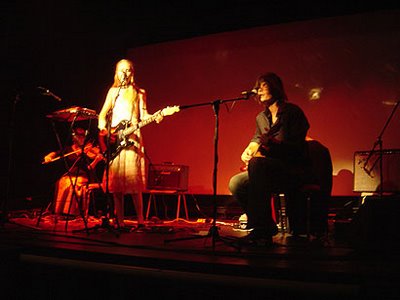 It’s been a whole year since I last saw Mi and L’au perform, and it’s obvious they haven’t been resting on their acoustic heritage too much. The sound has evolved from those fragile beginnings with the duo fleshing out their live performance with the addition of two extra members (who perform independently as a duo themselves under the name of The Fuzzy Lights) one violinist and an electric guitar soaked in a whole board of effects. They gave a ‘Cocteau Twins’ like shimmer and drawn out swell that neatly fitted round the sound, like a multi-coloured lustre or an accented echo slowly ebbing away with Mi and L’au soaring over the top - phoenix like. 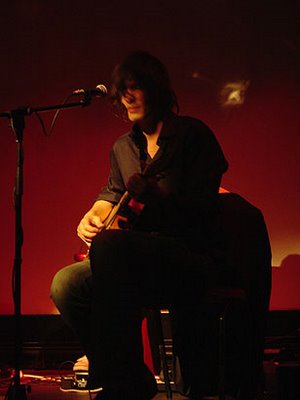 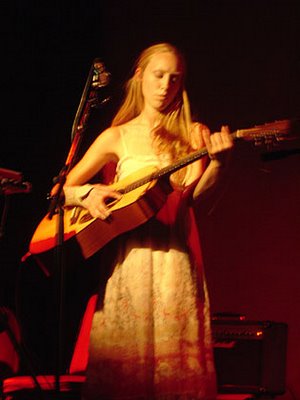 They started in an experimental mood similar to the stuff that was on ACT II , a deep drone with semi-abstract finger-picks – the sound Lau was creating with his acoustic, sounded chillingly alien, my wife looked worryingly at me, as if to say she wasn’t going to enjoy this experience but luckily her fears dissolved as they launched into more familiar territory. 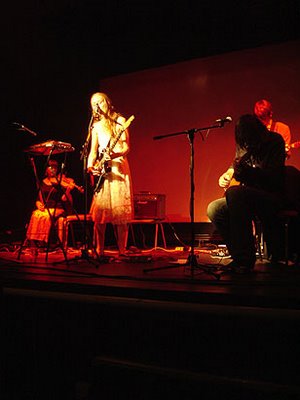 Mi had replaced her acoustic for a shiny electric but treated it the same, happily slowly picking out notes with her fingers and cross mixing her effects box from time to time. Skeletal, ghostly white she was like an apparition with vocals that seemed to come from some enchanted parallel universe. L’au, for the most part was hunched over his guitar, his hair plastering his face in shadow, whisky by his side. Fingers picked avant-shapes from the strings, or would go all classical, creating a beat and melody simultaneously with one hand, which was just amazing to watch. His voice a deep harmony to Mi’s as they presented some radical re-works off their YoungGods album – They Marry – The Philosopher – A beautifully measured version of Nude. Almost half the set was dedicated to new material showing the creative lights were still blazing strong. During the set, the duo’s eyes would meet and radiant smiles were their replies to each other - glad to see that touring hasn’t put a strain on their relationship. 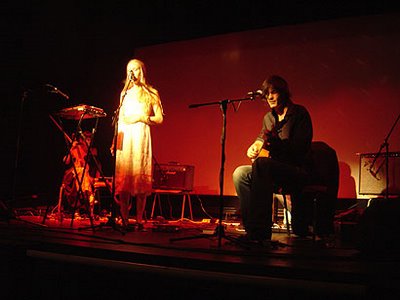 The Cube management mindful of the 11pm residential curfew tried to cut their set short but after Lau complained – ‘they were just warming up’ – ‘and things like this take time to grow’ – They managed to squeezed in a few more tunes, all new apart from an awesome re-working of ‘the nipple song’ (please, please release this as a single Mr Gira). Mi’s vocals sometimes surprisingly angry, at one point deeply bellowing something about ‘don’t build yer towers here’ later wavering mesmerically on an absolutely beautiful track centred around ‘Your touch on my skin’.

Bloody wonderful songs of love from two people still happily finding their voice through each other, and great late night listening… if they grace these parts again I’ll be first in the queue, can’t seem to get enough of this stuff, guess I must be a romantic at heart.

Anonymous said…
even if nobody quite seems to understand what is really happening here ... snakes of the world you are welcome in their kingdom ... saylor and L U were right ... the rest will follow ...
Friday, September 15, 2006

Cloudboy said…
guessing questions are useful...
is that snake as metaphor or a winding road that leads to somewhere
Sunday, September 17, 2006