The Flower and Corsano Duo

The support, Silver Stairs of Ketchikan, didn’t make an appearance stage wise, which was a pity as I was really looking forward to checking out this faction of the Thoughtforms collective and basking in that sensual vocal n shimmer, ah well hopefully I’ll catch them some time soon. After 2 hrs of sofa lounging and being hypnotised by the trippy gel projections stolen from some 60’s loft party, the main act finally graced that there stage. 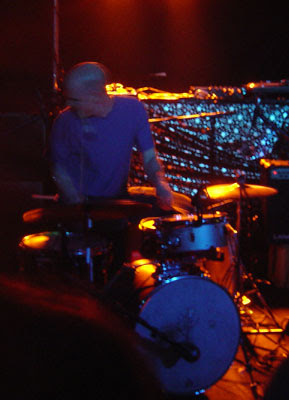 Right from the offset all drum clichés vapourised in a thunderous torrent of crazy free-form action n flying drumsticks. A dazzling display of dexterity, in fact I’ve probably never seen a drum kit used in such an expressive way before, like painterly splatters of different textures / forces n delightfully strange shapes, just amazing to watch / experience. 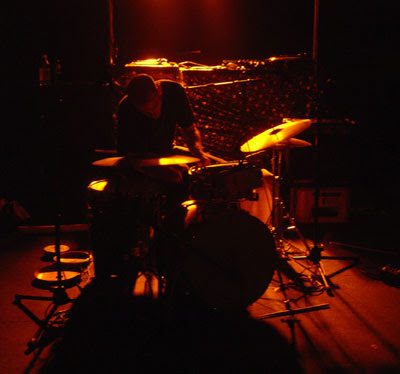 Loved the way Mick Flower (vibracathedral orchestra) was throwing across this bed of de-tuned strings, letting Eastern flavours slip under / over, a shifting divan of repetition, creating a heavy dronescape that Corsano punctured, sort of thing that forced your body into gradually widening sways. 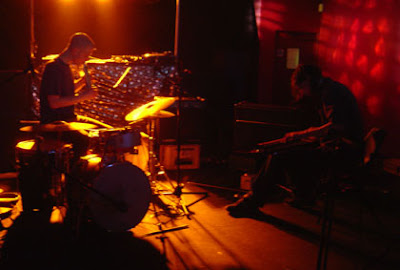 Pretty continuous, the set varied from displays of power to more subtle workings, particularly when Corsano switched from percussion to blown piano. Back on the percussive side of things, loved Corsano’s use of hub caps, transforming them into Tibetan singing bowls, whilst producing secondary shivers with his hyperactive digits on the drum skins they were resting on, a lush and eerie surface reverberation that wrapped itself round Flowers mantra, like a genie escaping a bottle.

Flower's instrument looked Indian in origin, a combination of strings and valve like keys, laid on his knees, his bent body animated to every sound, hands frantically piling on the exotic textures. 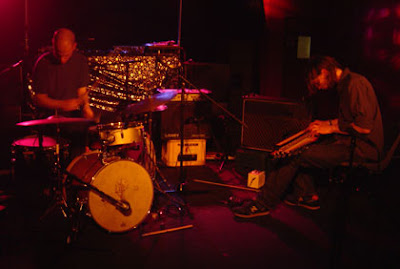 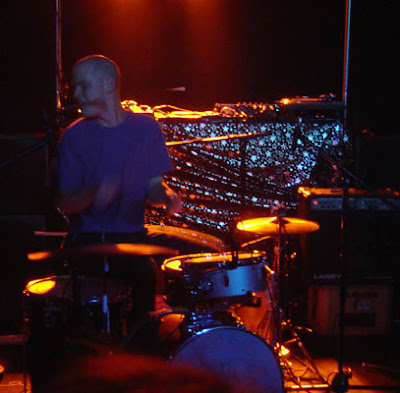 When the whole shebang ended, about an hour later, you just knew that the duo wouldn’t be able to muster an encore, so dripping in sweat they politely announced that the show was finished.

On the way out spied that Wolf Eyes will be playing here in April, and had a 'pinch me i must be dreaming' moment.
chris corsano gig mick flower the cooler

Anonymous said…
oooh Wolf Eyes will be playing around the corner here soon toooo... But April is once again going to be a terrible month...with at least 2 nice festivals...and i´ll have to choose...
Monday, February 19, 2007

Cloudboy said…
know what yer mean - often wonder when this info superhighway is going to catch up with my mini-metro incomings
Tuesday, February 20, 2007

Anonymous said…
Are Mi and l'Au playing near you?
Wednesday, February 21, 2007

Cloudboy said…
unfortunately no, it seems a strictly European tour, but James Blackshaw is making an appearance in these parts in March. If you get chance to see Mi and L'au take it, they weave a strong magic indeed.
Wednesday, February 21, 2007