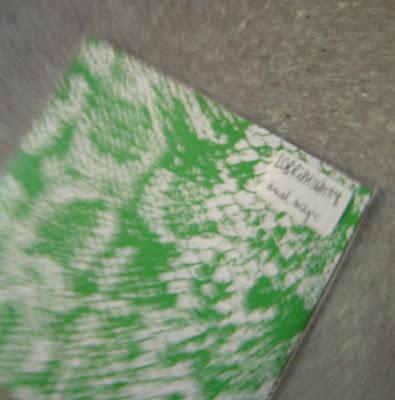 That data-scrawl Lubriphikatttor were supplying on their recent split with the Cousins of Reggae really peaked my interest, those KK Null dentist drill sensibilities they were throwing out left me hankering for more… what could they do if given more space?

So slapping five Euros on the ‘Galerie Pache’ counter I got my grubbies on this full-lengther from the boys, and I’m chuffed to report there’s plenty of pleasing poly-chromatic abstractions a flowing throughout. Clocking in at just a smidgen short of 50 minutes it’s a real bargain. With a few unexpected quieter moments along the way, balancing out some of the noisier excesses and homing your attention to the details in both…

The CDr starts off in the hush of static - a concoction of ripped nylon, hydraulic calipers and chirping electronics wrapped in a fuzzy carrier. There’s this snake charm of a tune (which gels well with the cover) all scissored edges as something electrical gnaws at the periphery. A treetop chorus is circling around like an electro-magnetic aviary and you can feel the chaos building. Soon enough it’s tearing a way through everything; the melody, a sacrificial lamb to screaming skull destruction…. then cropped suddenly to a yodel-like, Kalahari bushman ending - a quiet ear wash readying you for the second course.

Track two starts with some circuit bending in a bath of battery acid, limbs trashing around, vivid splashes in a tunnel of razors, an excavation in sporadic sparks of gnarly guitar grafted to an atonal drill squeal. The damage is substantial, the debris littering the place in foul squirts and spirals, all those agitated shapes, and colours fighting for your attention.

By comparison the third track is as close to semi-ambient Lubriphikatttor come, although they can’t resist adding some trademark anxiety to the mix during the tracks epic 18 minutes. It starts, with a minimal Mego type tap-dance of shuffled sandpaper over an electrocute spit / skip.

There’s a secondary data smudge propping up that spectre of a beat, with guitar/machine intentions sinisterly shadowing the game, praying for an opportunity to expand the scenery. - A siren warbles behind the glitchiness then it's flung forefront, heralding a creeping petri-dish of ugliness - all close up, itchy, full of cybernetic howling.

This in turn flips out of focus in favour of some subverted ambience…. purring away on a bed of slow burning textures … all twitchy… the odd discordant bleep let over to some lovely Pterodactyl-like cries trapped in a wing flap hex, spacey UFO oscillations spinning over its reptilian skin….

This is quickly cast back into a grinding corkscrew of valve filth and squiggles of knotted data – injections of beat struggle a two-step jig amongst it all. Drowned in a screw-fit melody of different tones … somebody’s sanding the table down while a drill slides greasily through the legs.

Those wing flap textures make a come back over more valve flutter, fucked keyboards limp off into the sunset, a jumble of innards - all picked apart and sizzling… tonal chasms fall over a cutlery rummage then badly tuned radio following a muted fallout ending.